Cassandra ascended the spindly staircase to the tower at the top of the deserted high rise. 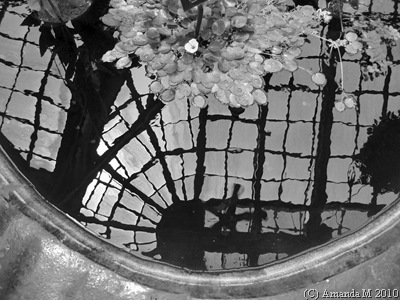 The werewolves lived mainly underground for privacy and protection, while their leaders kept the lower floors of the high rise for themselves.

The upper floors were desolate, wind wistfully tousling the white canvases covering windows and furnishings. Long ago this room had been an office. A computer lay partially dismantled across a desk, several of its keys littering the floor below. Leather-upholstered chairs were torn and askew. A coffee mug still lay on the desk near the broken computer, a darkened ring inside telling the story of years of use before its abandonment.

In the corners, where paper and litter rustled, Cassandra knew large rats lived, and she did not venture further into the rooms, but continued on the staircase.

"Grainne," she whispered mournfully, tears in her voice, "what happened to you? You were the only hope of our people. For a while we have been able to live almost as humans lived."

Grainne had left no sign, no trace of the concoctions she made to sustain the werewolves in their human form. Many of them had searched her rooms and files, but Grainne had memorized her ingredients and formulas, and she grew so many kinds of herbs there was no telling which combination formulated the elixir.

Cassandra gave a gasp of dismay as she entered the conservatory at the top of the stairs. Plants lay in great decaying heaps. Only a week had passed since her death, and the October air was cool and inviting for plants, the best time in the West for growing things. There could be no natural reason for this destruction.

Lightly Cassandra touched the top of the soil. Unless the plants had been poisoned. Had Grainne destroyed her garden to protect her work? Or was someone else responsible for this destruction?

Suddenly she wanted to crouch on the sod floor and cry. It all seemed too much, too hopeless,

There was no one to tell her what to do. Cassandra laughed out loud when she realized that was what she wanted to hear. There was no clean, clear way to go, there was no certainty, and so many things in the past had proved wrong, false, faulty.

She had to invent the way.

She wished she were a witch like Grainne. She wished she knew the way to make the plants heal, their physical and spiritual properties.

She looked out over the desolate skyline, imagining herself roaming the woods, feeling the wind ruffle her thick coat, her belly hungry, always hungry. There would be a day when those kinds of sensations would be all she and her people would know. But trapped within her was a human soul. She would hunger for other things. Beauty, knowledge, love.