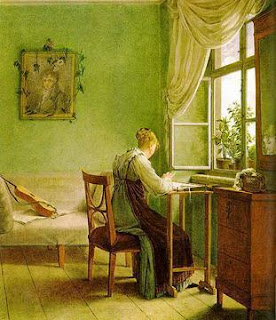 With infinite care Oriente leafed through the old diary, which had been lovingly hand-sewn with thread. Pearls or some sort of bead had adorned the cover, but they had long since been lost. She laid aside the journal with a strange feeling that transcended the clinical atmosphere of her work room. It seemed profane to touch the journal with white cotton gloves or view it beneath a dim fluorescent light.

She had never believed in ghosts or considered their existence in a meaningful sense. But she felt that someone was speaking to her now. She was a stranger to love or friendship. Those sentiments, she felt, belonged to a gentler time, like the time when this girl had lived. This was a fast-paced era, not a time to write one's heart into a journal or literally fade away from love. And this was not a time of friendship.

She had once heard someone say that men and women both had need of healthy competition. Men exercised this impulse in sporting games, but women had no suitable outlet to relieve this tension. There was no socially acceptable way for them to insult or demean one another, so they often fell to petty lies and alliances, often encased in heavy veilings of self-deception and Christian goodwill.

(Is this Oriente speaking?)


But she dreamed foolishly of someone who would understand her -- and she knew she was hard to understand -- so very hard -- and love her.

Others had told her again and again that she had been born in the wrong time. Or that her past life was too much with her.

She turned the pages of the small, fragile book, her gaze warmer, more loving than before. She was allowing herself to dream.

But all too quickly the dreams became a reality. Here the author was scribbling her own name -- Oriente's name -- again and again. For a moment she was unable to breathe. It was a coincidence. It absolutely had to be. She forced herself to read.

This young woman -- Delphinia -- was describing in feverish detail her desire to unite with Oriente -- convinced that should they meet, they would understand one another's hearts.


Beneath the scrawled confession was a hand-drawing. It was of Oriente. The past and the present Oriente. There was no mistaking the own frank, strange curve of her dark brows on her white face, the unruly ringlets of her hair.

I must be dreaming, Oriente said to herself. It is too late. I have been working too hard. I am hallucinating. I need help.


Her restless hands stilled as she remembered her engagement with the barista that evening. She didn't want to meet him -- she positively didn't want to -- no good would come of it. Like every other man, he clearly thought she was someone she was not. Or even more likely he had called the wrong person. He would be in for a surprise when she stepped toward him in the restaurant. She could see his surprise clearly. That would explain why he had never spoken to her in person.

What am I to do? I feel so alone. I just wish I could escape into that other time. Oh, I wish that I could.