If you were alive, and here, 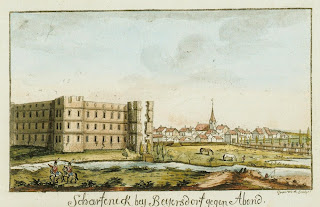 We would be in perfect sympathy, perfect understanding.


It is the tragedy of my life to have missed her sweet presence by mere months.


If I had come those months ago before the Markgraf had become engaged to Adelia, would he have married me?


Delphinia ceased her scrawl, laid down her pen and took up her cane, and paced the room. She might have wished to guard her private words from the sights of others, but she was too distracted to think clearly. The open pages lay on her desk as moments later, she pulled her shawl from where it lay at the back of a chair and wound it around her, stepping from the room.

Like an unloved person the natural scene outside had grown starker and crueler at winter's onset. It was impossible to behold the gray, still scene without a shiver. It was pitiless without even one shriveled brown leaf clinging to a branch.

It was tea time, but the sky was already darkening. Lamps were lit in the hallway. Up ahead in the gloom Delphinia could see Gervaise's figure gliding out of sight, and to her gaze it was as comforting as a sun. Gervaise was motherly and practical in all her ministrations. Delphinia guessed she had noticed the shorter days and had adjusted her routine to better dispel the castle's gloom by lighting the lamps early.

She entered the portrait gallery with the reverential silence and care the large room seemed to necessitate. It was as vast as a cathedral and its air of looming solemnity never failed to impress her. It was meant to encompass the grandness of the castle's ancestors, a place to study and remark on long-ago deeds. Delphinia had come to look at the portrait of Oriente.

However the gallery already had a visitor. She recognized immediately Gauvain's looming presence.

Her heart throbbed instantly, painfully, on the recognition. Her first impulse was to flee. She had come to the gallery casually, in her loose day-robes, with a mere shawl about her shoulders.

He stopped her with a glance. He was standing near the portraits of his mother and father, apparently contemplating them. "My lady. Walk with me."

Her breath stilled at the low command. In his eyes was the singular recognition of yesterday. He had avoided her since his return from Baden Baden. But when they were together, this. She loved him, and it was impossible for an intelligent person to decide otherwise than that he had been on the road to love her as well, initially, before he had come to his senses.