The little chickens have survived an exceedingly cold night. This morning I was heartsick to encounter the front. I didn't check on the chicks before work. We have some power troubles in that regard: we have no working flash light and no outdoor lighting near the hen house right now. If I had opened the door, the cat might have rushed in, endangering them. I would have had no way or catching him, or them, in the dark. If they were dead, they were dead. I would have to wait till daylight to know.

And I thought about it all day, believe me.

I have looked at site after site insisting the warmth and care that baby chicks need. One of them had a photo of fluffy little nothings that looked nothing like the two-week-old behemoths in my barn. I kept thinking, these chicks seem robust. It doesn't seem like the cold snap would kill them. But if there's something developmental about it, perhaps their physical strength doesn't matter.

This afternoon I got home and opened the hen house to find the beasts once more doubled in size, as strong and plucky as ever. They did migrate their little flock over to the corner without the window, though.

As usual, they were not pleased to see me. I moved their feeder and waterer over to their new preferred location, and they were voracious. An enormous, black glossy thing made the mistake of crawling out of a crevice and both Snow White and Sleeping Beauty glared at it with naked lust. It retreated before they could make a move.

This hen house will surely be the most exterminated place on all our acreage. 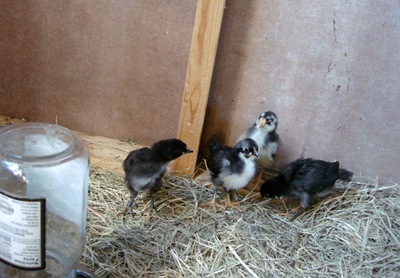 I am beginning to see my naming of the chickens after the Disney Princesses is rather ironic indeed. Let me introduce you.

To the far left, with the black beak and feet, is Cinderella, so named because she has the most ashen coloration. She is also the smallest and least feathered; at least, she was yesterday. Today she was noticeably larger.

Closest to her is Sleeping Beauty, and above Sleeping Beauty is Snow White. Those two are the biggest, strongest and meanest, and battle constantly for dominance.

On the far right is Beauty. She was the first chick I held and named. She has black feet, but a yellow beak. Her face is strikingly beautiful, yes, really. I know she is a chicken. As soon as I looked into her delicate face I named her Beauty. 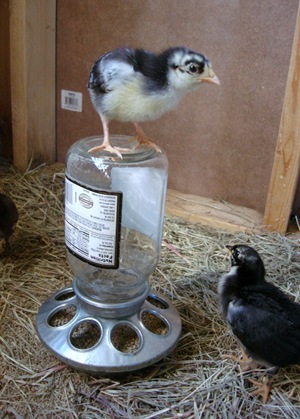 Snow White loves to perch high, but it upsets Sleeping Beauty visibly every time Snow White stands on the feeder. 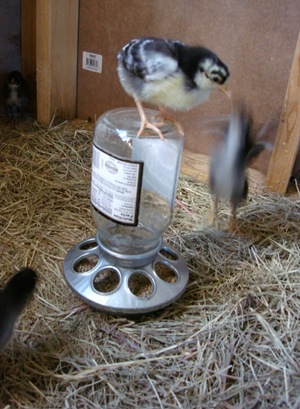 Sleeping Beauty (the blur) did win that round.

Tonight is another cold front. I am a little nervous, though all my senses suggest my chickens are fit. I closed the windows in the hen house to keep out the wind.