The ballad of Mr. Tom and Liza Jane

Last time we went to Jefferson there was a poor old nag parked outside of our hotel every day. Her skin sagged over her bones. She literally looked like she was going to die.

I was upset by the sight of this poor old horse and eventually connected her with the sight of an old-fashioned moustached man sitting in our hotel lobby. 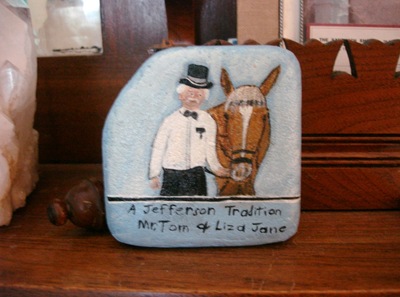 Apparently, these were Liza Jane and Mr. Tom, respectively. When we were in the coffee shop I mentioned last post there was this little stone commemorating them.

The reason it was important was because I was incensed by the sight of that pathetic horse. I thought she might be mistreated, but Nathan managed to persuade me that the 110 F temperatures were causing the Clydesdale some misery. I had already begun planning my campaign, http://www.savelizajane.com, but I agreed reluctantly. 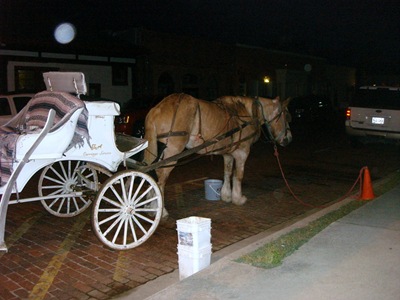 Well, while we were waiting for our ghost tour to begin, Nathan alerted me to the presence of a certain carriage in our vicinity, and I took this photograph of Liza Jane. She was looking much, much better than last summer. Filled out and not looking like she's about to crash to the ground. And I got a couple of orbs in it. Look at the one above the buggy seat. That's right where a head would be. 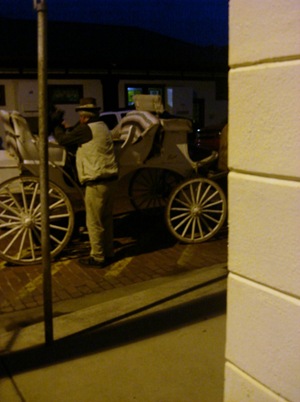 Anyway, better and better. Mr. Tom came around. He was putting Liza Jane up for the night.

Okay, the only other thing about this is, every time I saw Mr. Tom driving Liza Jane around town (or not), I felt sad, because there were all these young, sprightly horses and brash-voiced tour guides in fringy carriages carrying around tourists, and Mr. Tom's buggy is quite a different thing, and Liza Jane is so old. It made me feel like they were kind of fragile.